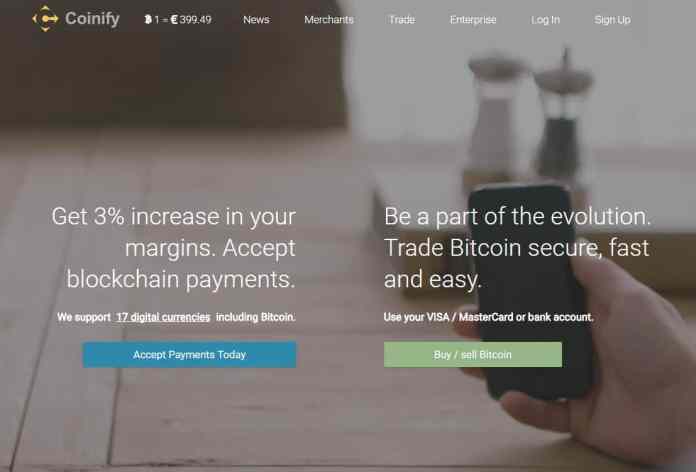 Blockchain, the world?s leading provider of digital currency and distributed ledger software, yesterday announced a partnership with Coinify, the leading Blockchain payment & trading service provider, that will allow individuals to, for the first time ever, seamlessly and expediently fund their wallets.

The partnership will enable nearly instantaneous wallet funding without compromising user security or control. Given Blockchain?s market dominance (with over 50% market share it?s wallet is the world?s most popular, powering over 100 million transaction) this announcement marks a major milestone for the Blockchain industry ? one that is expected to spur increased user adoption of bitcoin.

?Digital currencies and peer-to-peer transaction networks have the potential to modernize a financial system that is currently failing over a third of the global population,? said Peter Smith, Blockchain?s Chief Executive Officer. ?This announcement represents a giant step forward in making bitcoin, still a nascent currency, a more compelling and efficient financial solution for new users.??

Acquiring bitcoin and other digital currencies has, historically, been a difficult, slow, and risky process ? hampered by high fees, long settlement delays, untrustworthy service providers, and opaque identity verification procedures. The Blockchain-Coinify integration will eliminate this friction, enabling near instantaneous wallet funding via credit and debit cards inside a single user interface. Users funding their wallets will be able to instantly authenticate payment methods and purchase bitcoin by confirming the values of two separate, nuanced transactions charged to their cards. Users will also be able to purchase bitcoin directly from their bank accounts, although wallet funding through this channel will only happen as fast (or as slow) as the bank transfers themselves are able to settle.

This significant industry milestone will materially improve the user experience and make it easier than ever for mainstream consumers and businesses to tap into the Blockchain ecosystem. Continued Smith, ?At Blockchain, we are on a mission to build an open, accessible and fair financial future, one piece of software at a time. This partnership is a huge step toward realizing that accessibility mission. For the first time, users will not be subject to the delays, complexities, and security risks that have plagued digital currency adoption in the past. This partnership will make our wallet infinitely more user friendly and, ultimately, more accessible for the mass market.?


Blockchain aims to dramatically accelerate the re-engineering and modernization of the global financial system by on boarding millions of individuals across the globe into open P2P transaction networks over the coming years. In order to realize that vision, Blockchain is focused on building a series of localized onramps into its wallet that will make the acquisition of digital cash fast, easy and inexpensive for both banked and unbanked consumers across the globe. This partnership with Coinify, which will first launch in the U.K followed by an expansion across Europe, is the beginning of that product evolution. Blockchain will beta test the integration with select invite-only participants, working user feedback and learnings into an enhanced product for full global launch.

??Coinify shares Blockchain?s mission to accelerate the adoption of digital currencies by making them more easily accessible. And we are honoured to be a part of this strategic partnership to serve millions of existing and new bitcoin users. With Blockchain?s dominant position in the cryptocurrency wallet market, I believe this will be a real game changer.?